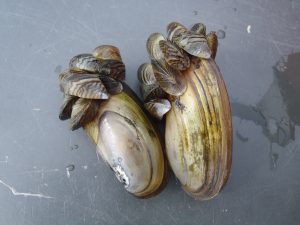 Zebra mussels are a common aquatic invasive species (AIS) discussed around the Wild Rivers Conservancy office, but what exactly is a zebra mussel and why does it matter? Recognizable for their distinctive D-shaped bodies and stripes, zebra mussels are filter feeders that take away food from native species and colonize hard surfaces or vegetation in lakes or rivers. They are a headache for humans, too, clogging drainage pipes and covering dock posts and rocks with their sharp shells. 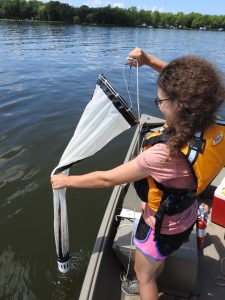 Water filters into the plankton collection cup as the tow is pulled up. (Photo: Sophia Patane, Wild Rivers Conservancy)

Each summer, Wild Rivers Conservancy partners with the National Park Service, the Minnesota and Wisconsin Departments of Natural Resources, lake associations, and others to conduct monitoring efforts for zebra mussels throughout the St. Croix watershed. Multiple spots along rivers and lakes are sampled through veliger tows, which help capture the microscopic veligers, or mussel larvae, at an early stage in their development. Since zebra mussels release their veligers when the water is at a certain temperature between late June and late July, early detection efforts during this time help inform management decisions and protect native species. When sampling lakes, Wild Rivers Conservancy reaches out to local lake associations to get them involved in the process by using a boat already located on the lake being sampled to avoid being a vector of spread.

Veliger tows are accomplished with the help of a device that looks like a windsock with a weighted thermos at the end of it. At each test site, the tow is lowered into the water to a minimum depth of 9 feet. Once the tow is pulled back up to the surface, the plankton net portion of the tow is unscrewed from the plankton collection cup. The plankton net (made of 63 micron mesh) helps direct the water into the cup, which is able to drain excess water to leave a concentrated sample of water with any particulates—and veligers—trapped inside. 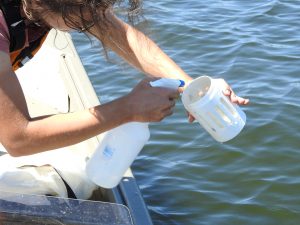 This process of veliger tows requires meticulous attention to detail. After a spray bottle is filled with water from the test site and used to wash down the walls of the plankton collection cup, the contents are poured into a larger container that will head to a lab for testing. For lakes, this container is a bit larger as it contains samples from three different sites (at the boat launch, on the opposite side of the lake, and at the deepest point of the lake) to create a composite sample. Ethanol is added to help preserve the samples in transit prior to testing. The time and location of each collection must be documented, then it’s on to the next testing site. The spray bottle is safely emptied and the net and cup is placed in a bucket with a bleach solution to fully decontaminate it between sites.

Results come back in 2-3 months, but the sample only needs to last for a few weeks in order to get to the lab. If the sample comes back positive, additional monitoring efforts must be made—including taking 5 separate samples, shoreline walks to examine boat lifts and launches, and even scuba diving to get a closer look. 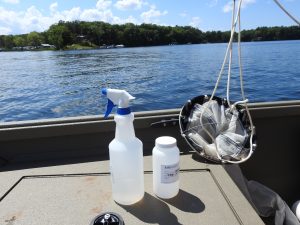 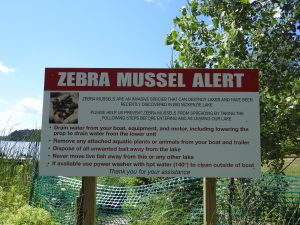 It might feel a bit counterintuitive to go looking for something in the hopes you won’t find it, but these efforts are essential to protecting our native species and beloved ecosystems. For example, Big McKenzie Lake lies on the border of Washburn and Burnett Counties in Wisconsin and has a known population of zebra mussels. Monitoring is essential to track the change in size of the population and progress of their spread. While it is illegal in both Minnesota and Wisconsin to transport any vegetation, animals, or invertebrates to other lakes or water bodies, an ordinance passed in Burnett and Washburn Counties has helped to further slow the spread to other lakes connected to Big McKenzie. It states that if a decontamination station is present at a boat launch, it is the law to decontaminate your boat or watercraft before entering and exiting the lake or waterbody. Failure to do so can result in a fine.

Through its connection to other lakes that eventually drain into the Namekagon River, Big McKenzie is a reminder of how the health of one body of water can have an impact on an entire watershed. To reach communities across a watershed the size of the state of New Jersey, Wild Rivers Conservancy provides support and collaborates with partners to diligently monitor and educate the public about zebra mussels. Boaters who carefully clean, drain, and dry their boats and watercraft to ensure they are not giving a free ride to the zebra mussels from infested water bodies play a vital role in protecting the St. Croix National Scenic Riverway for present and future generations.

If you would like to support this important monitoring work, and Wild Rivers Conservancy’s other important conservation work, please donate today.

Posted in Blog
Scroll To Top