and protect the ecological health, vitality, and natural beauty of the St. Croix.”

The Lower St. Croix River’s designation as a Wild and Scenic River set in motion a chain of positive events. Blufflands have been protected, helping to keep the river’s water clean and maintaining habitat for the plants, birds, and animals that we thrill to see. Once-private shorelines have become parklands where everyone can enjoy fishing and swimming. Careful planning has helped river communities retain their charm and become more vibrant. Here are a few of many places that would be very different if not for the lower St. Croix’s designation fifty years ago.

Experience the Difference—Places Changed by Protection

Just south of Osceola, Wisconsin, a series of sloughs are topped by blufflands boasting old growth forest, oak savanna, wetlands, and springs. Naturalists have called it a potential “ark” to preserve rapidly diminishing prairie species and when the Sandhill Cranes returned to this part of the river, it was here they were first spotted.

Thanks to the efforts of community members on both sides of the river and Wisconsin’s Knowles-Nelson Stewardship Program, this land—totaling more than 1,500 acres in four parcels—was designated a Wisconsin State Natural Area in 2009, open for hiking and hunting. (Maps and visitor information are available on the Standing Cedars Community Land Conservancy website.)

While there was early talk about building housing on the land, community members worked proactively, holding fundraising parties and asking for donations, creating a land trust, and engaging the Wisconsin Department of Natural Resources. According to Merritt Clapp-Smith, whose late father Bill Clapp was a lynchpin volunteer on the project, the land’s location within the Wild and Scenic Riverway was crucial. “People want to invest in a place they know will succeed and the national designation made it a sure bet.” 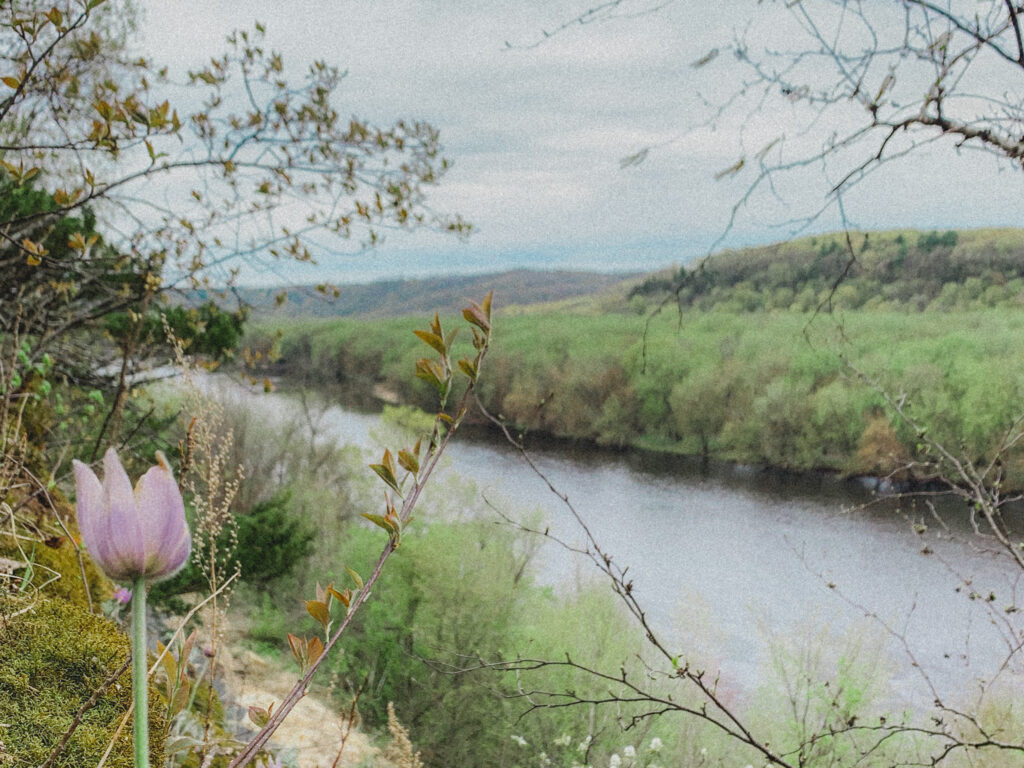 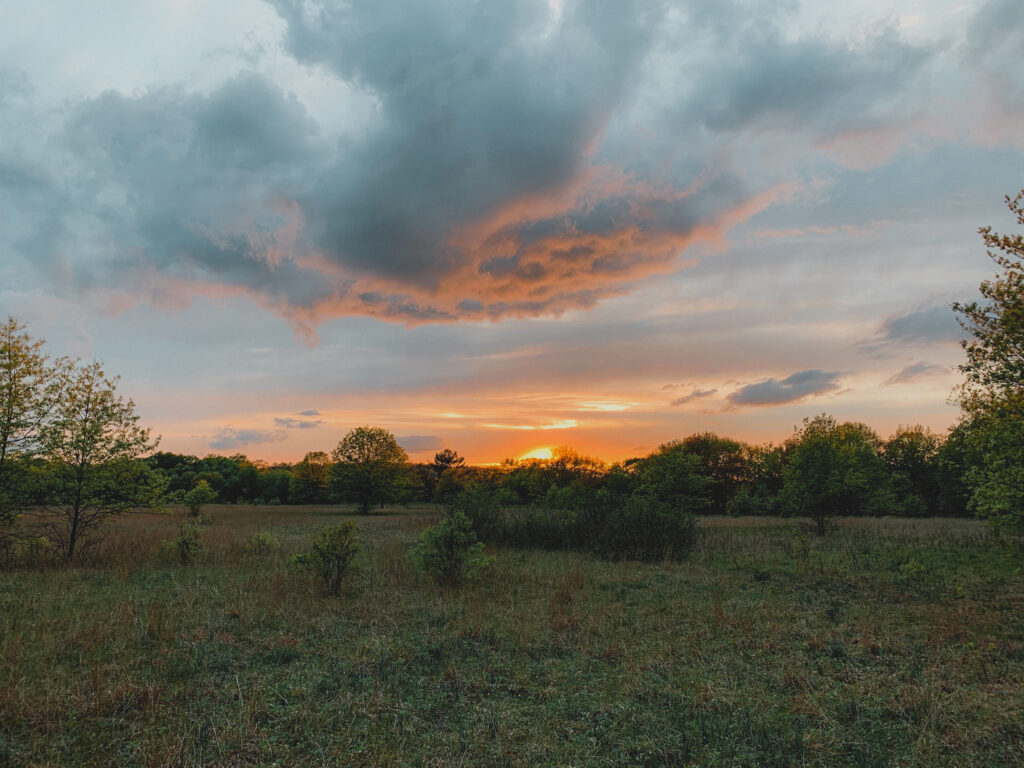 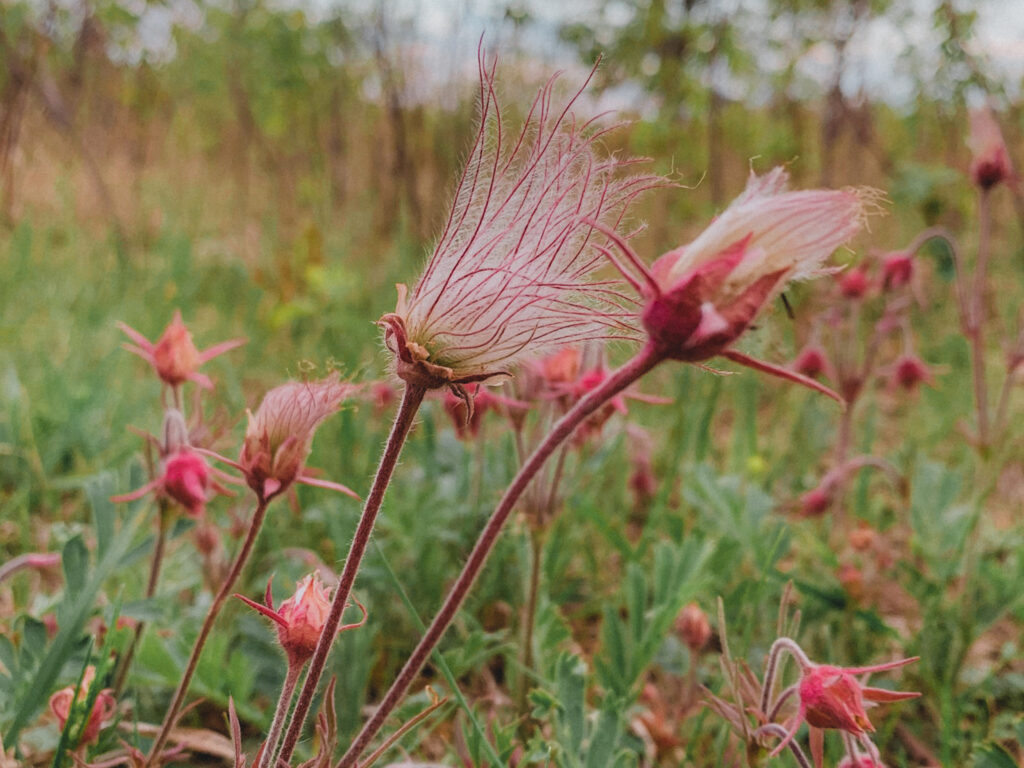 Stillwater Mayor Ted Kozlowski calls Lumberjack Landing park a “magical spot.” Just a short walk from downtown Stillwater, it’s an oasis of calm where canoeists and kayakers can put in and explore the nearby rookery and other natural features. “You can stand on the shore and look north, and you are essentially looking straight up the middle of the river and it’s so beautiful,” Mayor Kozlowski says, “it’s absolutely epic.”

This 15-acre property, once owned by Elayne Aiple, was the longest remaining stretch of privately-owned shoreline in Washington County and may well have become a private housing development, if not for elected and community leaders who put together a combination of city, county, and state funding to secure it.

“We aren’t making any more land or shoreland and people saw a glimmer of what the potential could be and stepped up to protect it,” said Jane Harper, who led the process as the principal planner at Washington County, where she worked for 26 years. Still in development, the park will ultimately include an accessible fishing pier and kayak/canoe launch, patio and picnic areas, and multiple trails, including a connection to the nearby Brown’s Creek State Trail, a former rail corridor that connects to the very popular Gateway Trail from St. Paul.

The lower St. Croix’s designation as a Wild and Scenic River has been an important ingredient in the success of projects like Lumberjack Landing, says Mayor Kozlowski “I think everyone can imagine what our riverfront would look like without that designation. I am personally hugely thankful—the St. Croix is such an asset for the region.” 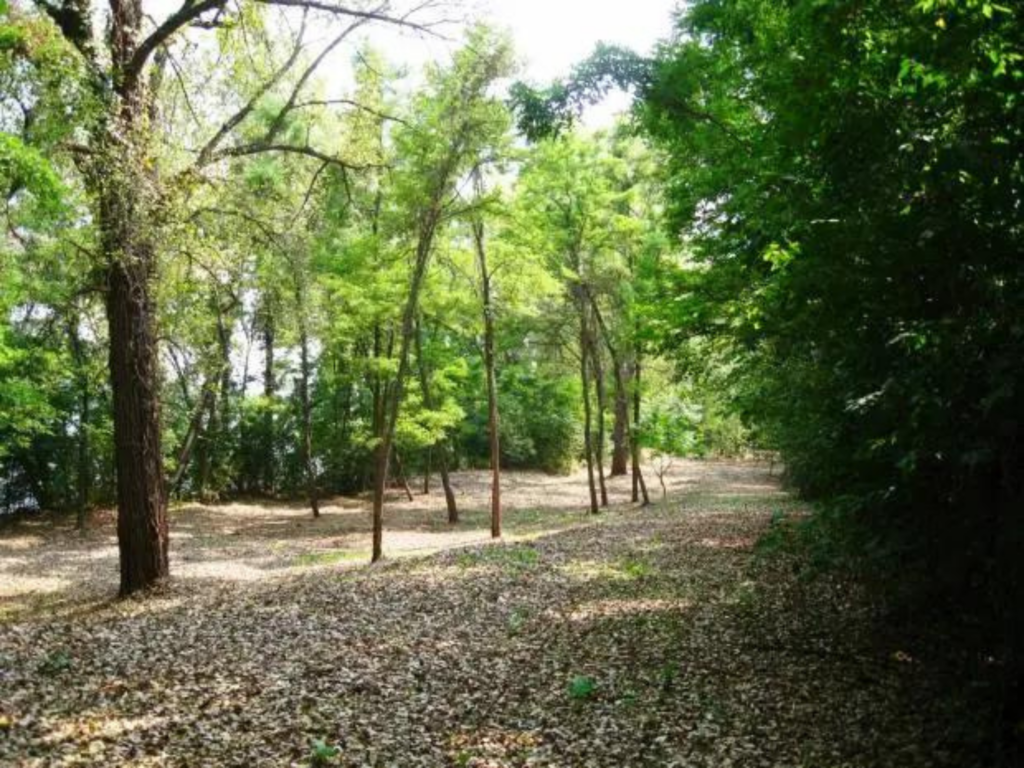 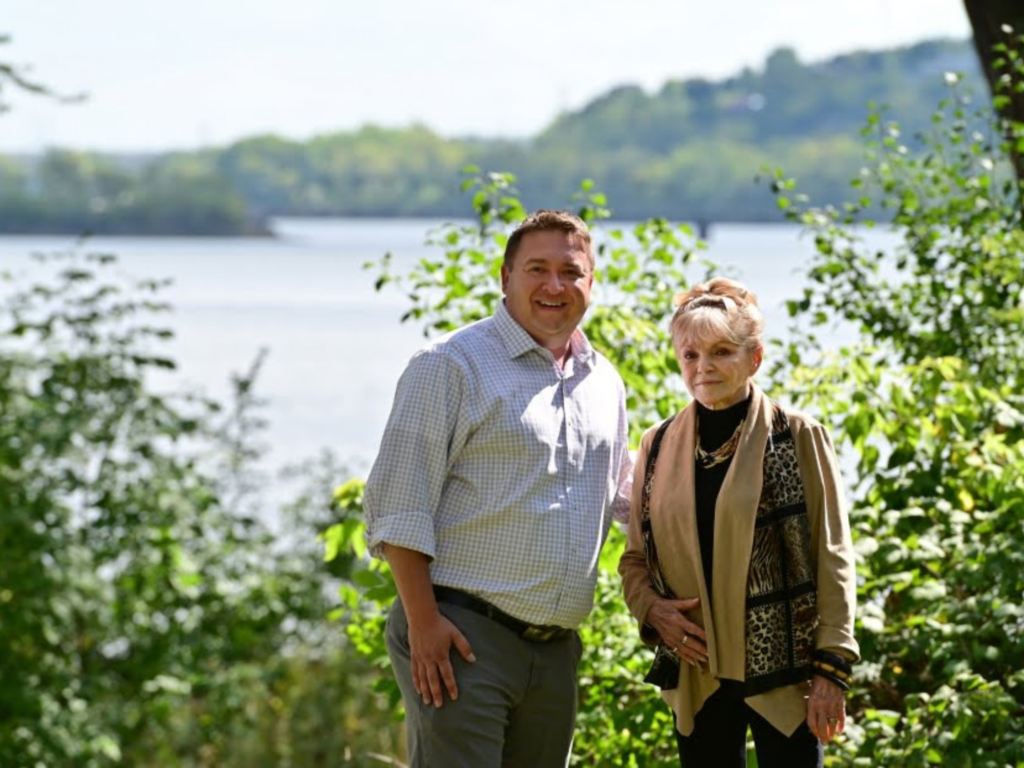 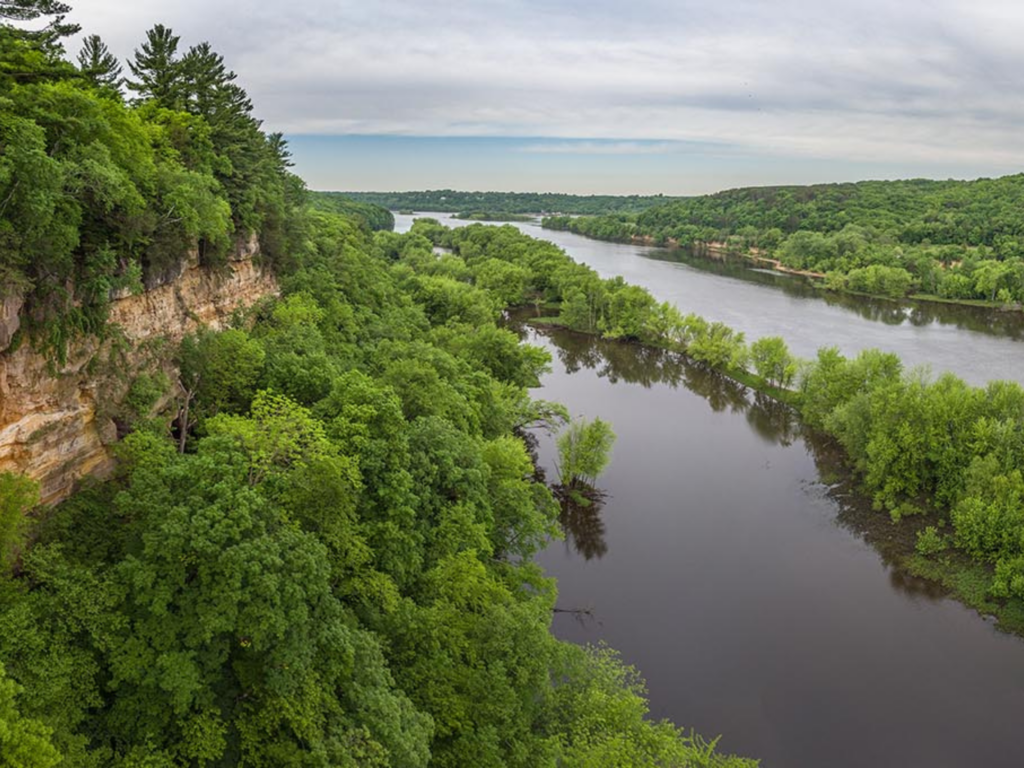 The lower St. Croix management plan recognized that a river so close to a growing Metropolitan area would face proposals for new transportation and utility crossings. Reducing the size and number of visible river crossings—and ensuring that any impacts are carefully investigated—were central elements of the river’s designation. Many of the bridges we see today would be different if not for this thoughtful approach.

In Prescott, Wisconsin, for example, a proposal in the 1980s called for replacing the community’s historic bridge with a blufftop-to-blufftop structure through the newly forming Carpenter Nature Center, says Steve Johnson who worked at the Minnesota-Wisconsin Boundary Area Commission at the time. “Yes there was a transportation need but there was also a scenic character need, and the states investigated a way to meet both of those requirements.”

When Wisconsin Governor Tony Earl and Minnesota Governor Rudy Perpich ultimately decided to replace the existing bridge with a new lift bridge in the same location, there was “a large sigh of relief,” according to Jim Fitzpatrick, who was then Executive Director of the Carpenter Nature Center. “The decision saved all of the property that the nature center owned—and all of the property south of it along the riverway.”

The new Stillwater Crossing bridge is a lengthier and more complicated story. Debated for decades, the handsome but expensive bridge was supported by many business and government leaders and has reduced traffic congestion in downtown Stillwater. Because a new bridge corridor was in conflict with the Wild and Scenic Rivers Act, the project was opposed by the National Park Service, conservation organizations, the late Walter Mondale, and many valley community members.

The bridge was ultimately built after federal legislation, that split Minnesota’s Congressional delegation, exempted the project from the Wild and Scenic Rivers Act. “Many of us who advocated for a less intrusive bridge solution will not soon forget those who stood up for the river and Wild and Scenic Rivers Act,” said long-time river advocate and former Wild Rivers Conservancy board chair Peter Gove.

The new bridge we see today includes several positive features that wouldn’t exist if not for the advocacy of citizens. Large concrete piers from an Xcel barge terminal were removed and a new boat ramp will be coming soon, both part of a hard-fought mitigation effort. The St. Croix River Crossing Loop Trail is one of the most positive results of the mitigation plan and is widely enjoyed by community members and visitors from around the region. 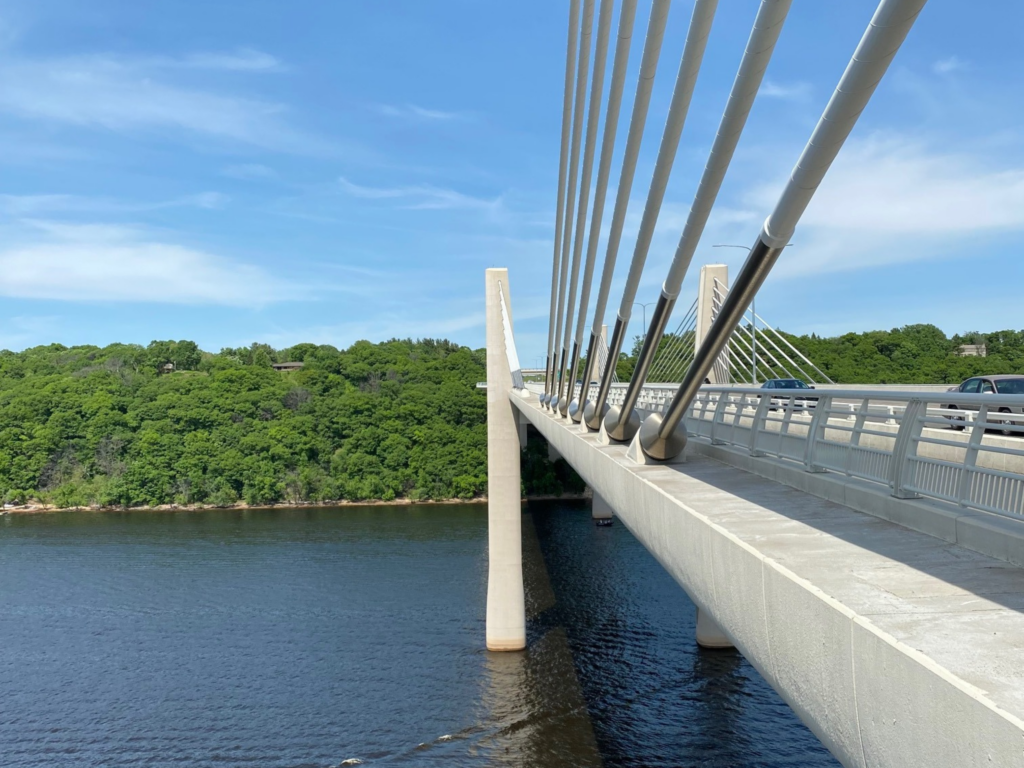 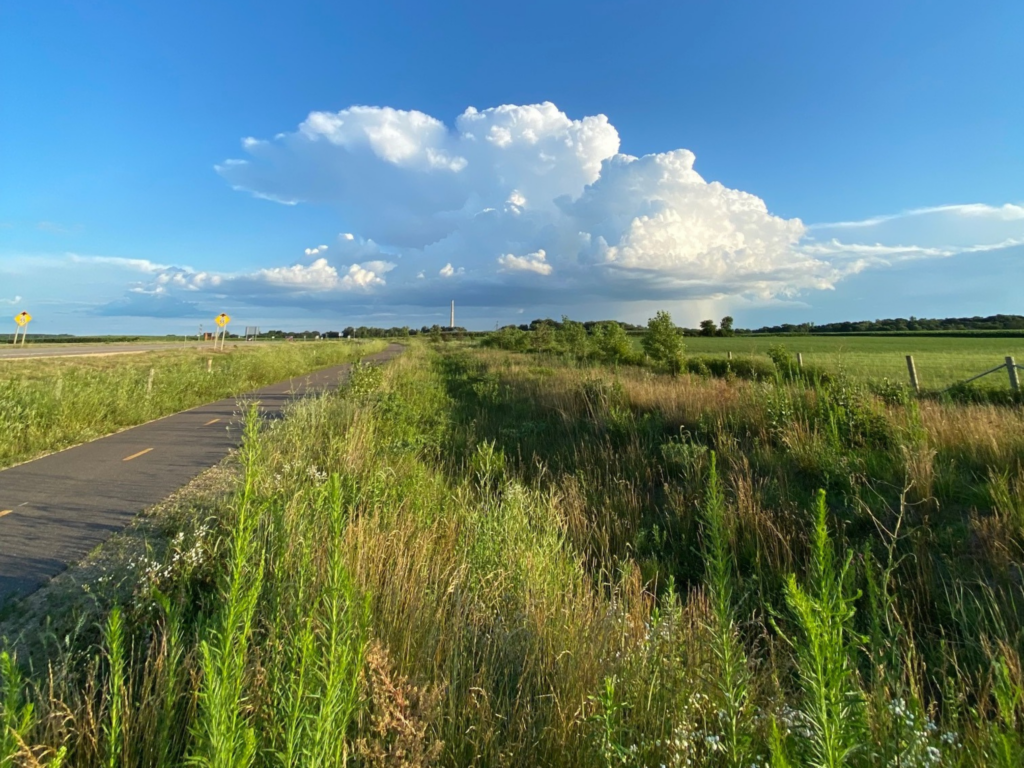 October 2022 will mark the official 50-year anniversary of the Lower St. Croix River Act. It’s a moment to celebrate, but Peter Gove reminds us that the river will always need champions.

“Looking back over the past fifty plus years, we can see the impact of government and citizen leaders who fought to secure and enforce lower St. Croix River protections—but this work is not done,” he said. “As the lower St. Croix faces ongoing development pressures, water pollution from concentrated animal feedlots, the spread of invasive carp and other concerns, we do well to take inspiration from successes that have kept the St. Croix much cleaner and healthier than other rivers so close to major urban areas. We must all continue to make good on the promise of the Wild and Scenic Rivers Act and protect the ecological health, vitality, and natural beauty of the St. Croix.” Beginning of the Lower St. Croix Photo by John Schletty