As spring begins to bloom over the St. Croix Valley, it’s hard to imagine that just a few short months ago everything was covered with a blanket of fresh snow. While warmer temperatures invoke dreams of long days on the water, it is also nice to look back on cooler days, which can feel refreshing as humidity and mosquitoes start to creep their way into our lives again.

In the St. Croix watershed, everyone spends time outside all year-round and frigid temperatures don’t stop most families from enjoying the winter season. The parking lot in Willow River State Park is frequently crowded with nature lovers strapping on snowshoes and waxing cross-country skis on weekends when there is a fresh snowfall.

It was on one of these weekends that we had our Willow River Family Snowshoe, just one in a series of eight free snowshoe hikes the Wild Rivers Conservancy put on in partnership with the National Park Service at the St. Croix National Scenic Riverway in northern Minnesota and Wisconsin. On this particular day, our group was joined by the Advancement of Hmong Americans, or AHA, a club from the Twin Cities that encourages Hmong youth and families to engage in outdoor activities.

There are around 49,000 Hmong individuals in Wisconsin and over 60,000 in Minnesota, making them one of the largest minority groups in both states. Connecting with nature and the natural world is a huge part of Hmong culture, and AHA works to foster a strong relationship between the Hmong youth in the area and the plentiful natural resources we have here. 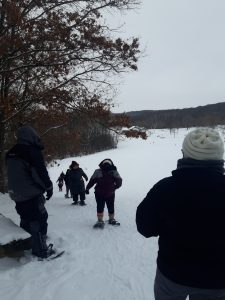 Working with Hli Xyooj, who organizes outings for the group, I started planning programs that would introduce the wealth of recreational opportunities the St. Croix River watershed has to offer. This began with snowshoeing, an activity that is a classic northwoods tradition.

With a show of hands, I found out that only one member of the 20-person group from AHA had been snowshoeing before—a small boy named Gabe, who tried it on a school field trip. With some effort, everyone in the group helped each other strap on their snowshoes. Walking awkwardly like penguins, they got used to the new additions to their feet that allowed them to float on snow they would have previously sunk right into. As they began their hike, the kids laughed but the adults looked skeptical.

The woodlands trail we were going to follow began high above the parking lot where the hike started, and so our journey launched by trekking up the park’s enormous sledding hill. When we reached the top, it was clear that some members of the group were beginning to rethink this whole snowshoeing thing. But they went on anyway.

As they slowly became more comfortable with the awkward gait snowshoeing requires, the group began to laugh and joke as we made our way up and down more hills, fresh powder from the snowfall earlier in the weekend flying up around us. The younger kids in the group teased the older folks as they lagged behind, and began to bond through their speed. AHA brings together Hmong kids and teens from different schools and areas of the Cities, so many of the students on the hike had never met before. Discussing mutual friendships, the perils of middle school, and their excitement over the three-day weekend to celebrate Martin Luther King Day, the students excitedly got to know each other as they rested during breaks in the hike. 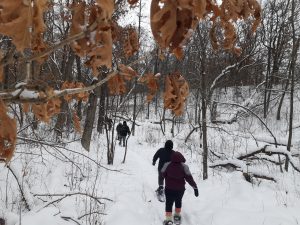 When we reached the turnaround point, many of the kids melodramatically collapsed with exhaustion. Taking another show of hands, I asked the group how many of them had snowshoed a mile before. Of course, no one raised a hand. I informed them then that they had all broken their personal record because they had just completed one mile of hilly trail. Some of the youngest members of the group broke out in cheers, and older members wore satisfied smiles. After a snack of M&Ms and granola bars, we began our trek back, and I reminded the kids that hot chocolate was waiting for them at the end of the trail.

When we had made it up the final huge hill we had started on, the group looked much more comfortable than when they began. Their skeptical looks from the beginning of the hike were replaced with smiles and laughter as they skidded their way back down the hill towards hot chocolate and the prospect of getting snowshoes off of their feet.

We took triumphant pictures at the end of the trail and I shared their elation. The experience wasn’t just new for the group, it was my first time guiding a trip independently. I was very pleased to have created a fun winter day, sharing my passion for the outdoors with a group of kids and adults who were new to this activity, and facilitating a celebration of community.

Looking back on this trip as summer approaches, I am reminded of how important it is to create connections between the St. Croix and Namekagon watershed and all the people that live nearby. By introducing families to the resources and recreational opportunities the area has to offer, we are creating stewards of the land and water that understand the rare beauty and rich ecology of the watershed.

This program and our free snowshoe series were made possible by a grant from the National Park Foundation and LL Bean. This grant has helped us reach new and diverse audiences in the Riverway.