From Tree Sap to Syrup: Learn How to Tap Your Maple Trees with Don Hansen

On April 4, 2020, the Wild Rivers Conservancy was set to host a Maple Syruping Workshop geared towards landowners at Osprey Wilds. The event would include activities such as identifying sugar maple trees, an overview of tree tapping equipment, touring Osprey Wild’s sugar shack, and a presentation by a local landowner who has been making maple syrup since 1999. This hands-on event would give landowners enough information to feel confident in tapping their own trees. Due to COVID-19, the event was unfortunately postponed until 2021, but this article was made in the interest of still sharing some of the joy of creating maple syrup with you in advance of next year’s syruping season. Don Hansen, former Wild Rivers Conservancy Board Chair, agreed to answer a few questions in lieu of presenting at the workshop so we could share his experience with you in the comfort and safety of your home.

Don’s Sugar Shack is located at a large red barn in Taylors Falls, Minnesota. He first moved to Taylors Falls in 1998 and saw 15 large sugar maples across the street, sparking his interest. After asking for permission to tap the trees, he made his first syrup on a small flat pan in the backyard. He now has 2,500 buckets, produces syrup for the St. Croix Valley, and has expanded to sell supplies—but his interest for maple syrup began well before 1998. 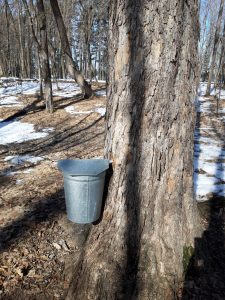 Getting to Know a Local Producer

Don was inspired by a book he read in the second grade. The book depicted how the pioneers were taught by American Indians to make maple syrup. The story included how they took boiling hot maple syrup and threw it in the clean white snow, instantly making a maple taffy treat. “That vision was in my brain for all these years and I acted on it, boiling my first batch of maple syrup in 1999,” Don explained. He continued to make syrup in his driveway until 2006, when he purchased a building and converted it into a Federal and State Licensed Maple Syrup Production Facility. With the help of the community and local church, they increased production drastically.

His favorite part about running the Sugar Shack has been boiling syrup in the spring and “getting outside after a long winter, cooking syrup at night with a full moon, listening to geese and sandhill cranes migrating, all the while enjoying the aroma of sweet maple steam from the maple syrup evaporator.” Along with getting outside, he also enjoys passing his knowledge to rookie syrup producers.

As a retired hydrologist, Don appreciates thinking about the location of the trees and if they are in a groundwater discharge area, a hill with low moisture and other variables that could affect production. He says the most challenging aspect of tapping trees as a scientist has been to “understand the whole concept of sap flow, when, why and how much,” but then concluded,

“We may understand a few basics of temperature and barometric pressure, but often times Mother Nature is in control and the sap may flow when least expected.”

Recently, Mother Nature has been shifting, causing the flow rates and times to change. I asked Don if he noticed any major differences over the years he’s been tapping. He explained how sap flows have started earlier than they did 10 years ago. The typical start date is March 17-20 with an end date around April 10, but this is now changing to late February and ending around the first week of April. I asked him if trees produce more or less these days. He responded with a characteristically specific answer as a scientist: “Tree sap production I believe is tied to soil moisture as well as air temperature fluctuations from freezing nights and warm days. This year the high soil moisture we had resulted in strong sap flows, however the sugar concentration declined about .6%. [The] average sugar concentration of sap is about 2.3-2.9%.”

Starting Your Own Production

Don’s advice to beginners? “Definitely start small, don’t tap too many trees, because you will be inundated with sap that you are unable to cook down into syrup.”

To start tapping trees you will need:

You will need to drill a hole in the tree 2-4 feet above the ground. The hole should be angled slightly up. Once the hole is drilled, make sure no sawdust is blocking the hole. You can then place the spile in the hole by tapping it slightly with the hammer. Once the spile is in, hook the bucket on the spile and place the lid on the bucket. Materials slightly differ but the concept is similar.

It takes around 40 gallons of sap to make 1 gallon of syrup, but this depends on the temperature and location. Once you have enough sap, filter with a cheesecloth or coffee filter to remove any large solids and begin boiling. As the sap boils off, add more sap gradually to the pot. The sap will darken as it boils. Once the temperature of the sap has reached 219 degrees, the sap is ready. You can filter once again to remove sugar sand, but this is not necessary. 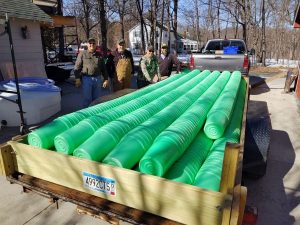 This delicious treat can be a topper for almost anything!!

Learn how to identify a sugar maple tree in the winter with our handy guide!